Reigning MotoGP Champion has ridden his title winning Honda RC213V up the Strief ski run at Kitzbühel in Austria to promote this week’s Hahnenkamm ski races.

It’s becoming a bit of a regular thing in promoting the ski races that are also sponsored by Red Bull.

Last year, Max Verstappen’s run in his Formula 1 car apparently caused a bit too much of a stir, so Red Bull decided to use the MotoGP bike this year instead. 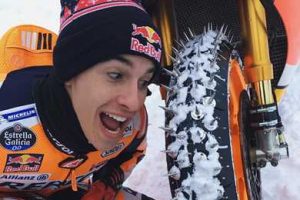 Naturally, the regular Michelin’s couldn’t cut it in the snow, so the crew had ice speedway racing world champion Franz Zorn fit the Honda’s tyres with 3cm spikes.

In typical Marquez style, he didn’t take it easy either!